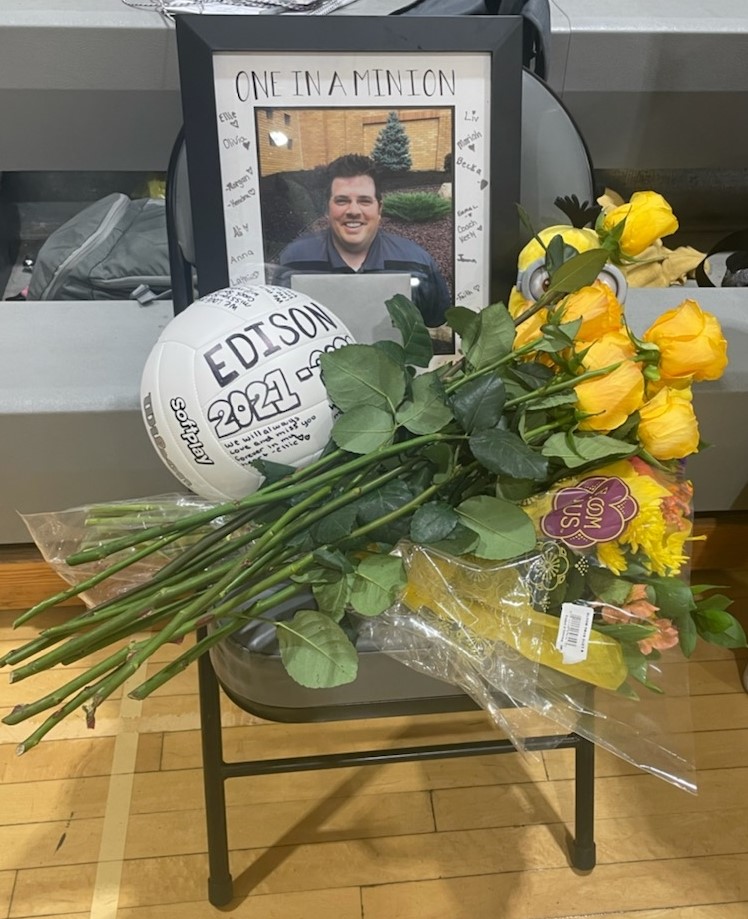 Tributes have flooded the Edison Nation to remember teacher and coach Todd Smith following his sudden passing on Sept. 17.

Smith, a 22-year educator who had been part of the Edison Local School District for the past 14 years, had served as a computer and gifted teacher at Stanton Elementary and also was head volleyball and track coach at Edison High School. He wore numerous hats as assistant athletic director, Edison Local Education Association treasurer, yearbook coordinator and a former track and volleyball official. Smith also was affiliated with the Eastern District Track and Volleyball Association and who also operated numerous wrestling tournaments.

Students at Stanton and John Gregg Elementary created Minion luminarias as a nod to his affinity for the “Despicable Me” characters and the memorials dotted the walkway at the Edison High School’s Unified Sports Complex during the recent Homecoming game while a retrospective video was also shown. Flowers, signs and T-shirts were another way students and colleagues have honored him, plus a scholarship is being created to carry on his legacy.

Stanton teachers donned specially created Minion T-shirts in the days following his death while posters and messages have adorned a bulletin board outside his classroom. During the varsity volleyball team’s game against Weir High, members wore yellow shirts bearing the words “Forever Our Coach 1977-2021” and a pair of angel’s wings and placed a sign, a Minion doll and yellow roses in his chair. The players went on to score a bittersweet victory which would have made him proud. Meanwhile, students in the bleachers took part in a “yellow out” by wearing the hued shirts in his honor and Weir’s team brought flowers and cards to extend their condolences. The junior high volleyball team also decorated a chair he used to watch their matchups.

Smith is being recalled as a bright light, someone who happily greeted children arriving at Stanton each morning and mischievously donned an inflatable Minion costume to the delight of others in the building. His classroom has since remained open for students and teachers to quietly reflect.

“Todd knew no strangers. Even to people in neighboring communities, he was seen as the happy-go-lucky guy who called Edison home. The students thought the world of him and the staff looked at him like a brother. It was nothing short of a pleasure to know and work with Todd. Growing up locally, we knew a lot of the same people and shared a lot of the same friends. He will certainly be missed,” said Principal Shannah Scotch.

School counselor Megan McNear said professional counselors were provided for students, plus teachers have also encouraged them to share their feelings. She added that Smith was a major part of the school and his loss was significant.

“We’re trying to grieve Mr. Smith and still continue education. We are a family here, and he was part of our Stanton family,” she said. “I think [the tributes] have helped the kids to be able to draw or write whatever they needed.”

She noted that fellow teachers Stephanie Thornley and Kelly Dopp organized the T-shirts and bulletin board, respectively, and junior high volleyball coach Sarah Louda said a T-shirt sale was being set to raise money for the Todd Smith Scholarship Fund.

Messages of support have flooded the district’s social media and McNear said everyone was pulling together to remain strong.

“People from other schools have reached out, so it’s not just our building but the whole district is supporting one another. I think everyone’s grieving and he made a huge impact.”

EHS Principal Matt Morrison said everyone in his school was saddened by the tragic event.

“The students and staff are devastated about the loss of Coach Smith,” said Morrison. “He had four jobs in our district plus helped schedule officials with assigner John Babolik, was the junior high BMC commissioner and ran numerous wrestling tournaments throughout the area. He developed loving and lasting relationships with our students and staff. Todd loved to laugh. We will miss him tremendously.”

Edison Superintendent Bill Beattie noted that Smith’s passing was a shock to the district.

“He was an integral part of the athletic program. He was the head volleyball coach and track coach and was very well liked,” Beattie commented. “He was a very jovial person. It’s a huge loss to the district and he’s going to be hard to replace.”